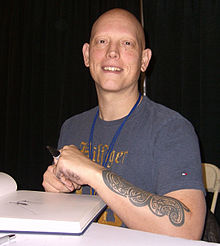 David Finch is a Canadian-Comic artist and he is known for his tremendous work on Top Cow Productions’ Cyberforce, as well as in DC Comics, Marvel Comics. He is also awarded in Joe Shuster Award for an outstanding artist award in the year 2009.

He has worked with almost all big companies and had an exquisite opportunity to draw some famous arts. He has done wonderful work in the comic world and also one of the best comic writers known for his comic books.

He is loved by all and all his fans are crazy about his books. He is currently working for DC comics. He has worked in different and many comics such as The New Avengers, Moon Knight, Ultimatum, Brightest Day, and many others.

He has a huge fan among youngsters as well as adults because of his extravagance and super comic books. His words and drawings are truly attractive that one cannot just leave it unnoticed.

David Finch’s career began at Top Cow Productions in the year 1995, where he assisted creator/artist Marc Silvestri before graduating to full-time. He created the title Ascension and then moved to Marvel comics. He was then blessed with DC comics and finally began his career with great success and efforts. This is how he began.

His works at DC Comics on the title Brightest Day and soon and very steadily became a DC exclusive artist. He has done notable work at DC comics such as Batman, Action Comics, Batman: The Dark Knight, and many others.

He is married to Meredith Finch. He has also worked with his wife on the title Wonder Woman. His genre of writing comic books is humorous.  His areas of work titles are writer, penciler, inker. Earlier he had a background in traditional comics and also worked in all big companies, he is really very talented.

David Finch’s official social handle accounts can also provide you with different updates and news that he has been looking forward up to or planning to begin with.

To learn something from him you can subscribe to his youtube channel and get to learn about drawing tutorials of comic artists in an easy and subtle way, you can get anything and everything you wish to know about from dynamic heroes to intricate backgrounds, storytelling, and common problems.

No votes so far! Be the first to rate this drawing.